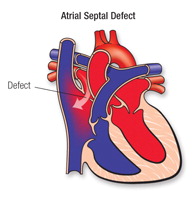 Introduction:
Atrial septal defects (ASDs) can occur in any portion of the atrial septum (secundum, primum, or sinus venosus), depending on which embryonic septal structure has failed to develop normally. Less commonly, the atrial septum may be nearly absent, with the creation of a functional single atrium. Isolated secundum ASDs account for ?7% of congenital heart defects.

The majority of cases of ASD are sporadic; autosomal dominant inheritance does occur as part of the Holt-Oram syndrome (hypoplastic or absent radii, 1st-degree heart block, ASD) or in families with secundum ASD and heart block.

Pathophysiology:
An isolated valve-incompetent patent foramen ovale (PFO) is a common echocardiographic finding during infancy. It is usually of no hemodynamic significance and is not considered an ASD; a PFO may play an important role if other structural heart defects are present. If another cardiac anomaly is causing increased right atrial pressure (pulmonary stenosis or atresia, tricuspid valve abnormalities, right ventricular dysfunction), venous blood may shunt across the PFO into the left atrium with resultant cyanosis. Because of the anatomic structure of the PFO, left-to-right shunting is unusual outside the immediate newborn period. In the presence of a large volume load or a hypertensive left atrium (secondary to mitral stenosis), the foramen ovale may be sufficiently dilated to result in a significant atrial left-to-right shunt. A valve-competent but probe-patent foramen ovale may be present in 15–30% of adults. An isolated PFO does not require surgical treatment, although it may be a risk for paradoxical (right to left) systemic embolization.

Treatment:
Device closure of these defects is considered in adults with a history of thromboembolic stroke.
at November 24, 2017

Email ThisBlogThis!Share to TwitterShare to FacebookShare to Pinterest
Labels: Cardiology